After qualifying earlier in the year, the students got off to a cracking start winning their first three matches. Buoyed by their success, they were up early at 6 am the second morning to drive down and do it all again.

The students continued undefeated and made it into the quarter finals ranked third behind Terrigal High School and Figtree High School. St Edward’s won their quarter finals against Oxley College comfortably and moved into the semi-finals against Figtree High School. Figtree displayed speed across the field however they were unable to crack the St Edward’s defence. Unfortunately they were able to break the line with several kicks in play that led to three quick tries. St Edward’s, led by Tyrone Dorrell and Kieran Diamond, came back in the second half with a quick try, however they were unable to maintain the pressure and were beaten 3-1.

The boys displayed outstanding sportsmanship and behaviour throughout the two days and did the College proud.  I would like to thank Aymn Hamilton, Jack Legge and Malachi Smith for training and coaching the boys throughout the two events. All three boys demonstrated their extensive knowledge of the game and their ability to motivate the students which was enough to earn them the title of ‘Super Coaches’. As their teacher it was rewarding observing these students growing in confidence as they saw how their peers reacted to their leadership. Overall it was a very rewarding experience. 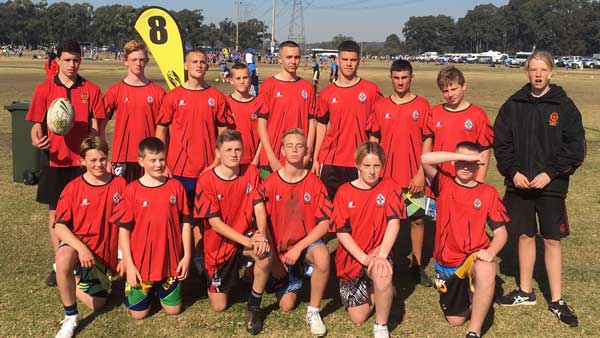