St Edward's College > Our College > The Christian Brothers and Edmund Rice
The Christian Brothers and Edmund Rice
Edmund Rice was born at Callan in County Kilkenny, Ireland in 1762. His strongly based early education would lay the foundation for his future business life and career. His business career began in the port of Waterford where he worked with his uncle, Michael Rice, provisioning ships. He was talented and energetic and soon became a very wealthy man. 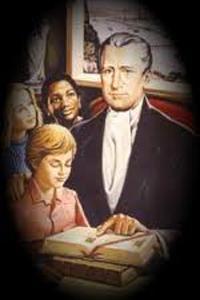 In 1785 Edmund fell in love and married Mary Elliot. By this time Edmund had become a well-respected and successful businessman who increasingly took more interest in the poor of Waterford as well as becoming more committed to his Catholic Faith attending Mass daily. Edmund’s happiness was shattered when in 1787 his father died and the following year Mary, his wife, was involved in a horse riding accident while pregnant with their first child. During the birth of their daughter in January 1789, Mary died due to complications and their young daughter, Mary, was born disabled. This shattering experience was the turning point in Edmund’s life.

In 1796 Edmund wrote to His Holiness Pius VI concerning a plan to set up an order to educate poor youth in Ireland. In 1798 the Presentation Sisters, founded in Cork by Nano Nagle, came to Waterford and Edmund actively aided their establishment and charitable work. In 1802, drawing inspiration from Nano Nagle, Edmund renovated some property, and set up his first school for the ‘down and out’ children. Six boys made up his first class which was the beginning of an almost overwhelming success and in 1803 Bishop Hussey blessed Edmund’s impressive new school, Mount Sion.

Edmund decided that the time had come to found a religious congregation of Brothers who would work in the schools. In 1808, Edmund and seven other companions took their first vows as Brothers of the Presentation, basing their life upon the principles laid down by the Presentation Sisters. Edmund would take the religious name, Ignatius. By 1809 there were seven hundred children attending Mount Sion. Finally, in 1822, Edmund Rice adopted new congregational rules and he, and his companions, would be known as Brothers of the Christian Schools or Christian Brothers.

The Christian Brothers movement soon spread throughout Ireland and across the world. In 1825 the Brothers started schools in England and in 1843 they came to Sydney, Australia. Today, Edmund’s legacy has spread to over thirty countries where the Christian Brothers bring Christ’s message and Edmunds inspiration to thousands of people in their ministries and schools. At St Edward’s College we can only rejoice that Blessed Edmund Rice’s message of love and hope continues to play a major part in our day to day lives.