Leaving behind the rain and arriving in bright sunshine, with a few changes to the roster, the team entered the competition ready to give it a good crack.

Saw the team play three games. The first game was against Northern Beaches Secondary College (the NSW All Schools Champions). An added factor was that this game was played on Field 1 and Live Streamed – which added to the excitement. The team started confidently and were leading 3-1 at the halftime break. We seemed to lose focus in the second half and Northern Beaches levelled the scores late in the game, 4-4. As would be the script for many of our games over the next three days – the team was able to find a way to win. Captain Ben Dufficy took advantage of an overlap and scored as the bell sounded in the background to get us off to a good start in the event.

In the afternoon we then played Cleveland High School (winning 7-5) and Cavendish Road High School (winning 6-4). Both games followed the script from the first game – we got out to a good lead at the break and then clocked off in the second half. Fortunately, we again were able to find a way to grind out our wins.

Day one over and although the wins weren’t pretty, we had three wins and were off to a great start.

We came up against the other undefeated team from Day 1 – Ormeau Woods High School, they on the other hand had won their games quiet convincingly. We challenged the boys to learn from day one and take the game to Ormeau.

And that is what they did. Right from the start, the boys were up for the game and played with great control and tempo. This seemed to frustrate Ormeau and forced them into making errors and giving away unnecessary penalties that we capitalised on. The boys won a tight one, 6-4 and shot to the top of the table.

Later that afternoon we played another NSW based team from Tomaree (Port Stephens). Having consolidated a semi final position already – this seemed to play on our mind set. Tomaree had more to play for and jumped out to a 3-0 lead. Frustration crept in and we fell into the bracket of trying too hard, which contributed to our situation. However, again the boys were able to get themselves back in the game and late in the second half, level the scores at 4-4.

Five games down, with four wins and a draw – the team had earned a well deserved break in the afternoon. Our results meant we now didn’t play until lunchtime the next day.

Late on day two, we found out we were playing Cavendish Road High School in the semi final. After a slow start on Wednesday – they had turned things around and had some great results on day two. We knew we were in for a good game.

This game had a totally different feel to it – Cavendish came out firing. Both sides traded tries in a very close game. Late in the second half, Cavendish scored to lead 4-3 and the pressure mounted on the boys. Yet again they continued to fight back and defended strongly before driving up the field to earn a penalty. Off the back of the penalty we scored in the dying stages to level the scores 4-4.

This took the game into extra time – a ‘drop off’ in touch football. Both teams started with 5 players only, on the field. We started with the ball and worked it up field before we scored to lead 5-4. However, as it was the first set, Cavendish had a right of reply. The five boys defended strongly as Cavendish moved the ball around before making a crucial mistake, handing us the win.

Off to the Final of the National Schools Cup against Ormeau High School.

Again, we had the opportunity to play on the main field inside the stadium and while the boys were tired – after three days and six (40 minute) games, they were very keen to improve on the team from 2017.

Unfortunately, Ormeau had other ideas. We started well, scoring the opening try to lead 1-0. From there it seemed to spark Ormeau into action as they flew out to a 6-1 lead at half time. The team fought back bravely in the second half, going down 8-3. Congratulations to a very good Ormeau team.

I am very proud to announce that our talented team came away as Runners-Up in the National Schools Cup. A wonderful achievement by a fantastic group of young men and three days of a gruelling competition. They were all wonderful ambassadors for the College. 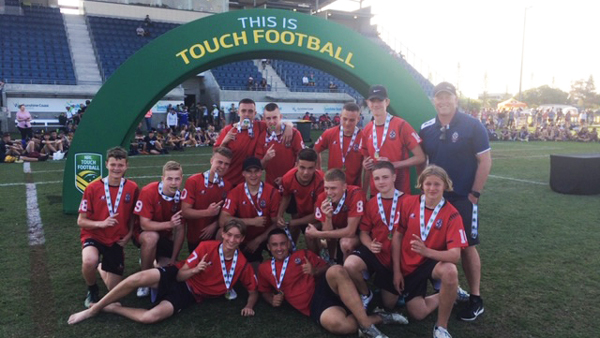