Year 9 and 10 All Schools Touch Football – Sydney Metro
In what was called the coldest day in 37 years, our Year 9 and 10 team travelled to the Kingsway Playing Fields in St Mary’s to contest the Metro All Schools carnival.

Feeling the effects of the cold weather, our boys bravely stepped out of the warm bus to begin their campaign. As the weather gods would have it, intermittent rain also began in the middle of our warm-up and remained with us for the day.

The format of the day involved a game on game-off situation, with the girls’ competition playing when we had our break. It was decided amongst the team to spend our breaks in the bus with the heater on to keep us warm. Nevertheless, the boys continued their run in the competition. Firstly, against Oxford Falls College in the quarter finals, winning comfortably 10-0. Our semi final was a much closer and competitive game against Narrabeen Sports High. By this time, the wet and muddy conditions had slowed down the pace of the game and made it very difficult to create opportunities. The team, however, was able to hang in there and graft out a late try to seal a 3-2 win.

Onto the final and as fate would have it, we played another coast team, Narara Valley High School. Fatigue had started to impact our depleted team of nine players and the conditions did not help. Narara was able to score two quick tries and the team was unable to claw their way back. We eventually lost the game 3-1. Full credit to Narara who were too good in the end.

Well done to these boys on a tremendous team effort on the day. Also, a big thank you to Toby Paterson in Year 12 who was our designated referee for the day. 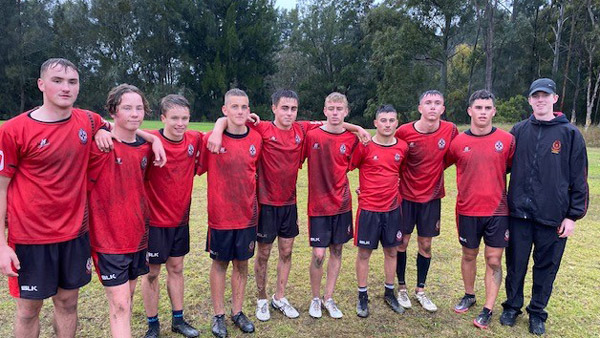