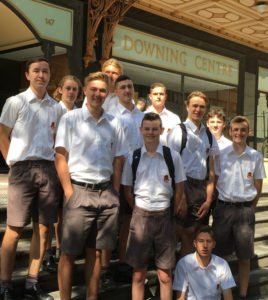 The Downing Centre is the main court complex in Sydney, containing local courts, state government courts and the District Court of New South Wales. The Centre contains 7 levels of courtrooms. It deals with a range of cases from drink driving, common assault and drug possession to complex jury trials for serious criminal offences such as commercial drug cases, robberies, complex fraud cases and serious assaults such as grievous bodily harm and sexual assaults. Each courtroom is normally used for a specific purpose.

On this day the students were able to watch a jury trial; R v Nealon. Patrick Nealon was charged with aggravated dangerous driving occasioning the death of the University of Technology student, Nicole Lewinski, at about 5.45pm on December 14th, 2016, while she stood on a pedestrian island. He had pleaded not guilty in his previous hearing. We heard the testimony of two witnesses that were present at the time of the incident and the submission of photographic evidence introduced to support The Crown’s case against Mr Nealon.

The students also visited Court 4.7; The Drug Court. This court supervises the community-based rehabilitation of drug-dependent offenders. The magistrate aims to assist non-violent offenders to overcome their drug dependence and their criminal offending. Weekly visits by some offenders are mandatory, ensuring they are complying with the programs and sanctions the court has issued. During the short time we were in this courtroom, we saw at least six people go before the magistrate for various offences with drugs.

Earlier in the year, the students participated in The Mock Trial Competition, supported by the Law Society of NSW. This provided practical experience into the running of a court case in a true-to-life adversarial setting. Visiting the Downing Centre provided an understanding of the way the courts work and as some of the cases unfolded, shed light on why the law is the way it is. It also demonstrated the emotional impact of the law on the accused, family members and friends.