On Thursday, 8 September, the College entered a record three teams in the Under 16’s Central Coast 7’s tournament held at Central Coast Sports College, Kariong. Each team played in a separate pool, with each pool having 4 schools from across the Central Coast. With many of the boys being exposed to Rugby 7’s for the first time, it was a daunting task to play such a fast-paced game on a full-field. However, each boy, and team, quickly overcame any such nerves and played some quality, exciting rugby.

The boys were all fantastic ambassadors for the College, and their sportsmanship and skills were commented on by both the referees and NSW Waratah staff. Congratulations to the boys for the skills shown, positive attitude and excellent support play throughout the day. 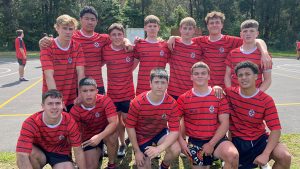 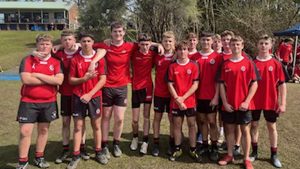 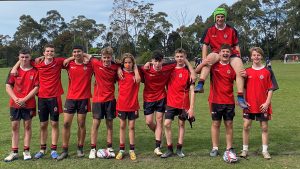 Tuesday 13 September saw the Broken Bay Diocese hold the inaugural Rugby 7’s championship, contested at EDSAC, Bateau Bay. Drawing from Catholic Colleges from Manly through to Lake Munmorah, it was a great opportunity for the boys to not only play some more Rugby, but to compete for bragging rights within the Diocese. While originally there were 7 schools entered into the Year 9 and 10 competition, by the time the day began this was whittled down to 4 teams, with each team playing each other once in the “pool stage”, with the top two teams then playing off in a final.

Having played together only the week beforehand, the boys were comfortable in the simple game plan of controlling the breakdown, recycling the ball quickly and spreading the ball wide. The support play was exceptional, with positive communication being the key.

Congratulations to the boys taking out the day in such a strong and commanding fashion. Definitely look forward to watching these boys continue to play Rugby in the future.