Under 14’s Rugby League
After two cancellations due to wet weather, the Under 14 Rugby League team got their opportunity to play in the Central Coast All School Roosters Cup on Tuesday 2 July at Morrie Breen Oval, Kanwal.

A cold but very sunny day greeted the boys at the picturesque facilities. The format for the day involved games of 10 minute halves, with a short break in between. We were drawn in Pool B and played round games against Wadalba High School (winning 34-0) and St Brigid’s Catholic College (winning 38-0). In both games the boys had all the running and scored some spectacular team tries. The turning point for the day, came in our last pool game against a very big Wyong High School team. Poor discipline and trying too hard as individuals, saw us move away from what we had been doing well earlier and the dreaded ‘frustration’ crept in. To their credit, Wyong was able to take advantage of a glut of possession and draw the game 16-16, late in the second half.

A quiet chat and some minor adjustments to our starting team, led to a renewed enthusiasm in our approach as we moved into the semi finals against Terrigal High School. Intensity in defence early, saw us take two intercept passes that led to Aymn Hamilton and Harry Bates scoring runaway tries. From there we seemed to click, and the boys piled on some terrific team tries to win convincingly 34-0.

Our grand final against MacKillop Catholic College had the added bonus, of the winning team progressing in both the NSW State Finals and the Cochrane Cup. When a MacKillop player dropped the ball from the kick-off, our boys took control of the game and raced in a brace of team tries to win comfortably 42-0.

Our Central Coast Champions now play the Newcastle/Hunter winner in the next round of the Cochrane Cup in Week 1 next Term (Cochrane Cup – Thursday 25 July, 9:30 am, St Joseph’s Aberdeen at Baddeley Park, Cessnock). They also play in the NSWRL – All Schools on Thursday 8 August.

I would also like to thank Mackenzie Zammit and Nate McLean from the Year 11 Sport Coaching class, who assisted the boys on the day. 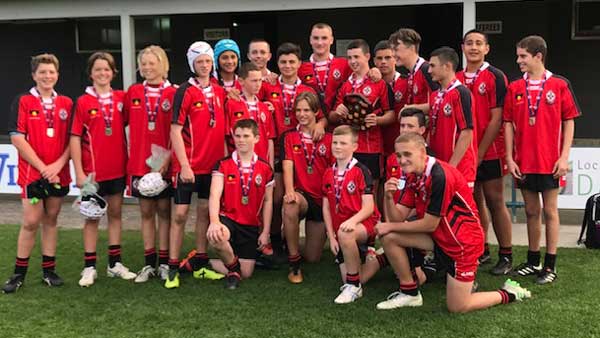