The teams were drawn against tough opposition, including sports schools from the Coast and the Northern Beaches. Eddies Red faced a strong Narabeen Sports High School, in their opening pool game. The boys tried hard, but went down fighting at the final whistle. They then faced Narara Valley High School and performed at a much higher level. Although they went down 1-3, the boys were unlucky not to have bagged a few more goals that their efforts richly deserved. The final game against Central Coast Sports College Red was a really tight affair, with the boys eventually losing 2-4.

Eddies Black performed with great aplomb from the very fist whistle. They swept aside Central Coast Sports College White and Brisbane Water Secondary College, with resounding 4-0 victories. Zach Sammut was a standout in both games, denying the opposition attacks on multiple occasions. Cooper Hall and Reid Spokes provided attacking creativity that had the opposition on the back foot in both matches. A 1-1 draw with Kincumber High School did nothing to slow the team down as they accounted for Central Coast Sports College Red in a free-flowing contest. Isaac Phillips and Cody Diamond both getting on the scoresheet as the team ran away with the game. The semi final against Central Coast Sports College White was easily the best game of the tournament. With two outstanding teams on show, the crowd was treated to some fine futsal skills and team-play. Going 0-1 down for the first time in the tournament didn’t phase the boys as Cooper Hall got the team level with a fine finish. With the last seconds of the contest, a well struck shot took a fortuitous deflection and their keeper was beaten. The game ended 2-1. Eddies Black then took first place by beating Central Coast Sports College Red 4-0 in the final. Riley Carmody-Smith blasting the fourth goal past their keeper to cap-off a fine tournament. 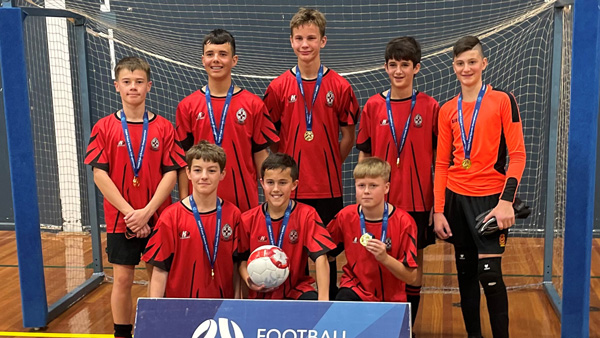 St Edward’s Black then travelled to Windsor to compete against all the other area winners in the State. The first game saw them drawn against Chatswood High School. A tough match to start with, but the boys hit the ground running with a 2-1 win. Cooper Hall and Reid Spokes both getting goals. Next in the pool was Moriah College. The boys were excellent against a good team and recorded a strong 3-0 victory. Riley Carmody-Smith was a rock at the back along with Jeremy Cipallone. Edmund Rice College, Wollongong narrowly edged St Edward’s 1-2 in a hard-fought loss. Cooper Hall gave us the lead with an excellent finish, however, we conceded two goals late in the game and couldn’t recover. The last pool game was against the Ponds High School. This was easily our best performance for the tournament. Reid Spokes was exceptional up front, scoring 4 goals in a 5-0 demolition. Murphy Owen was fierce in defence and Cody Diamond worked tirelessly up and down the court. Our quarter-final contest saw us draw Endeavour Sports High School. The game started well and Cooper Hall put us in the lead with another well taken goal. Zach Sammut made some outstanding saves, however, Endeavour proved to be too well drilled and were the victors in an entertaining clash. Credit to all the boys who played hard and represented the College in excellent fashion.