Our first match against MacKillop Catholic College saw Isaac Phillips scoring an early goal from a corner kick with a final result of 1-1 draw. Second match saw the team find their feet and move the ball round with a lot more confidence and the boys won 1-0. The team really hit their straps against St Brigid’s Catholic College winning 6-0. Sam Hughes was the star of the show in this match scoring four goals. Reid Spokes and Cooper Hall also scored in this match showing real talent as they moved through their opposition with unmatched skills. The following game saw the defence in our team tested against a tough St Leo’s Catholic College side. Shumba Mutokoyi and Arian McGuinness held our back line in solidly and both our goal keepers, Lincoln Gottardo and Zach Sammut were tested. Thankfully the team came away with a 2-1 win. The final match was hard fought and won against St Augustine’s Catholic College. This truly was a clash of the titans for the gala day. Both teams came out firing, but a through ball saw Isaac Phillips run away and blast the ball into the top left corner of the goal. Second half was tense as St Augustine’s took a free kick just outside the 18 yard box which hit the cross bar, eventually secured by our defence and cleared away.

Overall our boys played not only with skills but passion and sportsmanship, doing our College proud. 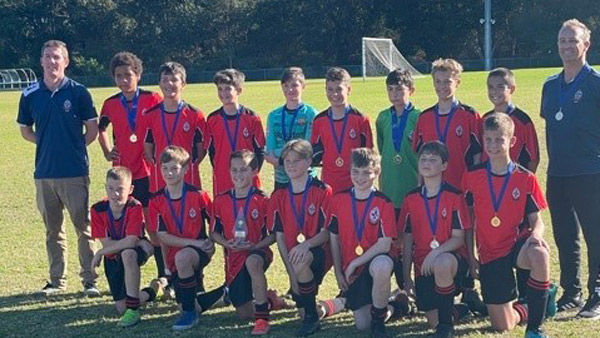