The Latest from the Environment Portfolio
Last term the College averaged over 200 students per week coming to school Trash Free on Tuesdays and over 50 staff adopted the initiative.

Students who brought a trash free lunch every Tuesday last term will be rewarded in Week 3 with a pizza lunch from one of our supporters, BamVino.  Members from the Environment Portfolio are working on increasing this to 300 students this term and have created an educational video to try and educate those that haven’t yet committed to the initiative, the video can be viewed below. Last term students recycled nearly 5000 bottles and cans in the Envirobank Return & Earn initiative. After the assembly last Friday 15 students took bags so that they could fill them and bring them in and we have had 3 students return an orange bag on Monday morning.

At assembly last Friday, students were shown a photo from a depth study into microplastics in the ocean. The photo showed the microplastics a bait fish caught in Brisbane Water, just in front of the College, had swallowed. These are the bait fish that bigger fish eat, and we eat the bigger fish… the message was very clear! 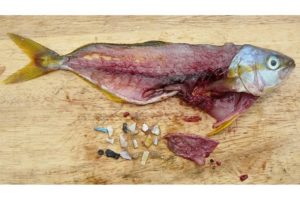 The photo was alarming, however, it was also brought to the students’ attention that Hilton Moore Oval in East Gosford used to be an old landfill sight and that the plastics buried below the surface are now starting to leach out into the Brisbane Water and the surrounding mangroves. The boys were shocked by the fact that even plastic that is placed in the red bin can end up in our waterways at some stage.

The College is doing a lot to stop the use of plastics including using biodegradable bin liners, refusing to use plastic cutlery and cups in the canteen and the use of biodegradable straws. We are asking students to do their part by getting on board with Trash Free Tuesday and by collecting an Envirobank bag to take home and fill with recyclables, which also earns Waterford hours. We encourage students to have a conversation with family and friends about responsible use of plastic or watch an educational film (suggested viewing ‘Blue The Film’ https://www.youtube.com/watch?v=dg-tUZG2vsA ).

The students in the Environment Portfolio are very driven and passionate about creating initiatives that support our environment. Two students will be representing the College at a Youth Eco Summit in September. We can’t wait to see what ideas they come back with… watch this space!