Oztag Gala Day
On 3 August St Edward’s College was represented by two junior teams at the Central Coast All Schools Oztag Gala Day. After numerous trials due to the number of students who wanted to represent the College, it was clear that the teams were going to be strong.

The Year 8 team were in a competitive pool and despite finishing 2nd, narrowly missed out on a place in the finals due to the for and against. It wasn’t the end to the day we expected but the boys still had a lot to be proud of. The boys comfortably won their games against Lakes Grammar School, Central Coast Adventist School and Wyong High School. They knew their toughest game was going to be against Central Coast Sports College 1 and although the boys lost 2-5 they showed resilience and determination – an impressive effort to only concede 5 tries to a team who comfortably won the grand final.

Our Year 7 team demonstrated their outstanding ability, winning all of the games in their pool by a considerable margin beating St Brigid’s Catholic College, Tuggerah Lakes Secondary College Berkeley Vale, Central Coast Sports College 2, and Gorokan High School. The finals proved to be a bit tougher but in the quarter final against Tumbi Umbi High School they played their best football and had a great win 6-2. The boys took this energy into their final game against Wadalba High School and came out strong with two early tries but unfortunately could not hold on to the lead and went down to Wadalba 2-3.

The sportsmanship and teamwork which was displayed throughout the day was commendable and it was amazing to see these young men represent the College with such maturity. A special mention to the Year 11 coaches Tyrone Dorrell and Zane Smith who shared their knowledge and experience of the game. 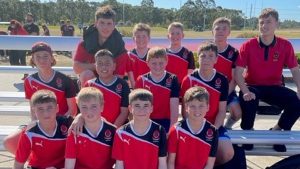