The team played pool games against:

This meant they topped their pool and now would play a quarter final against St Peter’s Catholic College, Tuggerah. In a very lopsided game, the team ran in some fantastic tries to easily account for St Peter’s 10-1.

The competition took a break at this point and moved to the ‘Possible and Probable’s’ selection trial for the Broken Bay (BBSSSA) team. We had 10 boys selected in this trial, with 8 making the final team, they were: Owen Flaherty, Toby Paterson, Fletcher Powell, Tyler Moriarty, Sebastian Plaister, Zane Smith, Kieran Diamond and Tyrone Dorrell. Josh Attard and Joel Evans have also been selected as shadows for the team. These boys now progress to the NSWCCC Selection Carnival on Tuesday 30 and Wednesday 31 March at Nelson’s Bay. 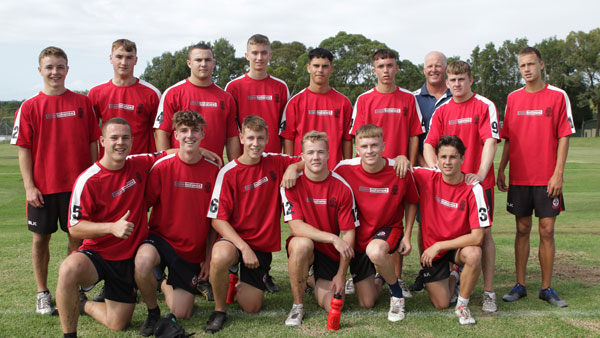 With the selection trial out of the way, it was back to the competition. Yet again we played Mater Maria and the boys were very much in cruise mode. Some individual brilliance and great team play saw us run away winners 5-1.

Onto the final and a surprise opponent in St Paul’s. Having played them earlier, the team had a good idea of what they needed to do to control and overcome an enthusiastic St Paul’s team. Our key players controlled the flow of the game and we scored several well-constructed tries. St Paul’s did not go away and kept fighting back with the Eddies Boys running out winners 5-2 and being crowned Broken Bay Champions.

A fantastic result and testament to a very good all-round team effort on the day.