A clash of dates (NSWCCC Selection trials) lead to the debut of several of our Under 16, Year 10 players. Making their entrance for the Open’s team on the day were: Dylan Poate, Daniel Peters, Wiremu Tibbutt, Eddie Bookalil, Owen Flaherty, Brock Marquart and Noah Morris.

The team played pool games against MacKillop Catholic College, Warnervale  (winning 20-0) and Northlakes High School (winning 14-0). These results meant we had already qualified for the semi-finals prior to our last pool game against Terrigal High School. We used the first half to see how the team was travelling against a strong Terrigal team. After withstanding some early pressure on our line, the boys gained back possession and dominated field position. This led to a try out of dummy-half to Wiremu Tibbutt and a 6-0 lead. The boys were very unlucky not to extend that lead with a dominant display that saw Terrigal drop-out twice. At half-time we had seen enough and made wholesale changes to rest up for the semi final. Terrigal fought back to level the scores and a penalty for offside at the kick-off, lead to them scoring on the bell to win 10-6.

The result had no bearing on our semi-final game against St Peter’s Catholic College, Tuggerah. The team continued to dominate possession and control the tempo of the game. This resulted in some slick tries as we raced to a 16-0 half-time lead. The second half seemed to drag on a bit, but the team continued to play within themselves to finish with a comfortable win 22-6. 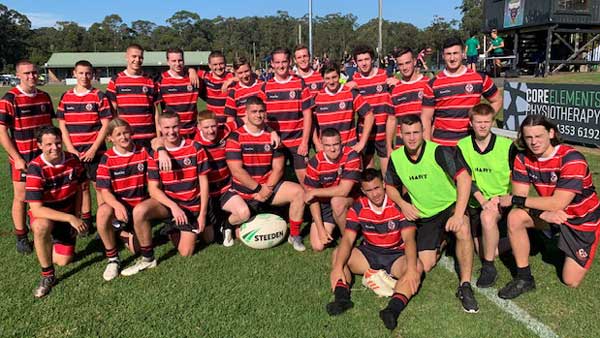