We started our day in Pool B, playing games against St Brigid’s College (winning 5-1), MacKillop College (winning 6-1) and St Peter’s College (winning 5-2). The results saw the team top their pool. A combination of speed, skill and awareness led to several slick tries that highlighted the quality of players across the team. Sebastian Plaister stood out with his enthusiasm in defence and attack across all three games. While the quality was certainly there, the team was playing within itself.

In the semi-final against Mater Maria College, the focus was on playing up-tempo and running their middles around. From the start we asserted our dominance and raced to a 5-0 lead inside 10 minutes. From there, we controlled the game and won comfortably 8-0. Joel Evans scored a brace of tries, including an intercept try from well past our side of halfway.

Commanding performances from the team in the round games, saw nine players selected in the Possibles v Probables, with the other three very hard done by, not to make it. Our boys did a great job and shone in the game with five players making the team (Sandon Smith, Owen Flaherty, Josh Woutersz, Ben Dufficy and Tyler Moriarty) and the remaining four boys named as shadow players (Zac Healey, Joel Sherub, Wiremu Tibbutt and Fletcher Powell). The boys will now head to Port Stephens to represent Broken Bay in the NSWCCC selection trials in early April.

The boys then had to re-focus on the final against St Leo’s College. Both teams started slowly, with mistakes and great reads in defence, contributing to some end-to-end football. Eventually, some slick short side play led to Daniel Peters scoring in the corner and saw us lead 1-0. Two, further tries, resulted from some very good lead-up from the entire team which gave St Edward’s College the win 3-0 resulting in them re-claiming the Broken Bay crown. 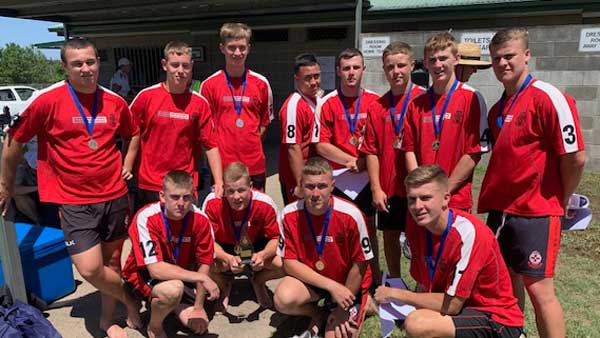