Open Rugby League – Schoolboy Competition
The Opens team continued their ongoing success in the Schoolboy competition. On Thursday 18 August, the team travelled down to Campbelltown Stadium to play in the NSW City Cup Finals.

In a challenging draw, the team was required to play back-to-back games against Ashcroft High School (Western Sydney) and VIC University (Melbourne), with the winner progressing to the NRL Schoolboy Trophy Final. Both games would be 2 x 20 min halves.

On the back of the draw, most boys have also been dealing with their local finals and because of this we lost Emmet Nicholls in Year 12 and Jack Legge in Year 12 due to injury from the weekend’s games. Fortunately, Tom Whitmore in Year 11 took the opportunity to come into the side and did a fantastic job for us on the day.

In our game against Ashcroft, we played a near faultless first half, completing our sets and kicking long into the corners. The idea was to run the big boys from Ashcroft around and take some of the energy out of them. Just after the half-time break we scored our fifth try to extend our lead to 24-0. Ashcroft scored two late tries to see a final score of 24-12. We had achieved our first goal for the day and now onto VIC University.

In the game against VIC University, we were a bit apprehensive at the start. The game plan was the same as they had a very big side as well, but it took us a few minutes to find our groove. We went to the break in a good position leading 12-6 but we had gained a lot of confidence in the way we had gone about the first half. In the second half we ran away with the game scoring some fantastic tries and utilising the vast space of the stadium to our advantage, eventually winning 38-6.

The result meant not only being crowned City Cup Champions, but we now have the chance to defend the Schoolboy Trophy we hold from the pre-covid 2019 team. Something that all the boys are very motivated to achieve.

In a small reward for the difficult draw we faced, the team will now play a home final. The Schoolboy Trophy Final will now be played at CCRSC Tuggerah on Wednesday 21 September at 1.45 pm. 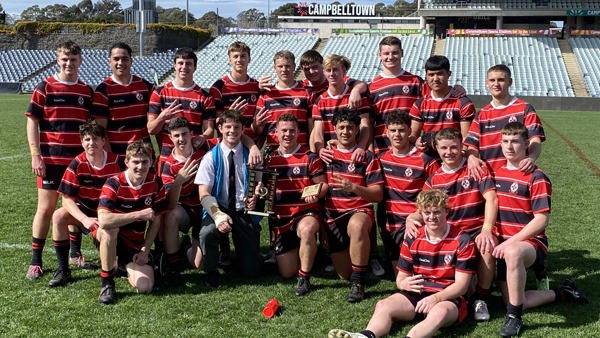