We drew Farrar Memorial Agricultural High School in round 1 and this involved a road trip to Tamworth. Several protocols had been put in place for the game/competition to go ahead and this allowed our squad of 18 to travel to Tamworth on Tuesday 28 July.

The game kicked-off at 10.30 am at the picturesque Farrar High School main oval. A mix of nerves and excitement spread throughout the team in anticipation of our opposition and the live streaming of the game. Many of the team had only just started back playing with their local team in the last couple of weeks and for some, this was their first game of the year.

We were very aware that Farrar would be tough and play a physical brand of football. The boys were up for this challenge, but there were some concerns from the coaching staff about the fitness of our team as a whole.

Both teams started cautiously, feeling each other out, completing sets and getting to their kicks. Early on it was clear that Farrar was going to attack us through the middle, and we were going to try and run them around. Tyler Moriarty, Ben Dufficy, Sandon Smith, Beau Newlands, and Josh Woutersz all had half chances breaking the Farrar line in the early exchanges. Some sustained pressure saw Tyler dart from dummy half close to the line and open the scoring in the first quarter. This was closely followed by very flat cut-out pass from Sandon to put a flying Beau Newlands over in the corner early in the second quarter. All was good and the team was playing with confidence.

As the second quarter continued, Farrar clawed their way back into the game with some momentum and repeat sets. By this time, we were starting to look a little tired and weary. Their classy five-eighth firstly scored a great individual try and then backed-up with an offload to score just prior to half-time and reduce the deficit to 12-10 at the break. The momentum of the game had certainly swung.

Farrar began the third quarter in the same manor as they finished the second. They were running hard and challenging our line. Sustained pressure led to a third try for the five-eighth and it looked like Farrar might skip away with the game.

Farrar continued to dominate possession and field position for the remainder of the third quarter and most of the final quarter. The Eddies boys hung in there and kept turning up in defence and stayed in the game. Late in the final quarter we had a few repeat sets but could not seem to find a way to crack their line. Farrar, on the back of a few penalties, marched down the field and attacked our line. On the back of a quick play-the-ball, and a decision to pass long saw Sandon Smith pluck the ball out of the air and run the length of the field to score. Ben Dufficy calmly converted to give us an 18-16 lead and see the boys hang on for a gallant win.

The narrow win combined with the access to the live streaming footage led to an interesting drive home. Countless reviews of the footage, reliving the key moments and many varied comments on the performance, filled our bus ride.

The win saw us move into the quarter finals and a game against the 2019 Champions – Westfields Sports High School. Unfortunately, we had to withdraw from the competition due to the date of the next round (during the Trial HSC exams), injuries and the lack of adequate preparation for the game. The competition has since been suspended due to the current Public Health Orders. 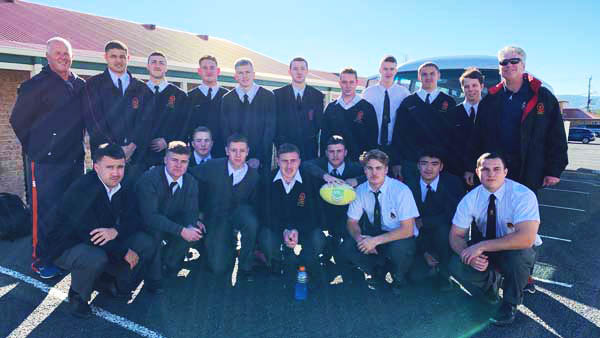