Intermediate Football
Congratulations to all the boys who represented the school in the BBSSSA Intermediate Soccer Gala Day.

The intermediate boys played exceedingly well and won the competition, which promotes them to the NSWCCC knockout competition beginning in a couple of weeks.

A 6.00 am start seemed very early for some of the team with a couple sleeping in and meeting us at the top of Kariong hill at 6:30 am! We arrived at Cromer Park at 8.00 am to warm up for our first of three round games, commencing at 9.00 am. The boys knew that we had to play well to ensure that we won the competition, however, this was a hard task to achieve in 24 minute games.

1 – 1 Draw against St Paul’s Catholic College, Manly. However, St Edward’s were the first team to score, which meant we progressed through to the final.

The NSWCCC Knockout Cup will be played against All Saints College, Maitland. Thank you to the boys who were selected to play. A few injuries and sickness put pressure on the team to play well and they responded positively. A quick shout out to Charlie Entwistle for being voted player of the tournament. Well deserved Charlie and the team. 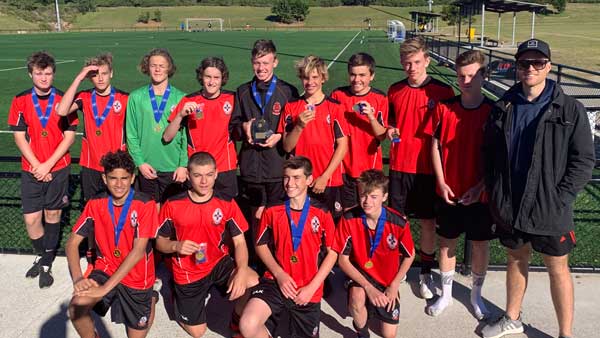