The Year 11’s had a tough first up battle against Central Coast Sports College. Unfortunately, the Eddies boys went down after the Sports College capitalised on some early errors. The boys showed plenty of spirit and skill to bounce back in their next game to get the win against a strong Kincumber High School team.

The Year 12’s showed plenty of flare in their first game against Kincumber High School.  Some great ball movement resulted in multiple length of the field tries, ensuring a comfortable win. Their second game was a tight contest against Central Coast Sports College. The Eddies boys came from behind with two late tries to get the win!

The final game for both teams saw an all St Edward’s battle, Year 11’s versus Year 12’s. After an inspiring tunnel set by other Eddies boys, both teams took to the field. Drawing a big crowd everyone was eager to see what unfolded. Both teams played very entertaining rugby with plenty of ball movement and creative play. A strong run by Brendan Escott saw the Year 11’s in good field position and capitalised with a try in the corner. At the sound of the final siren, officially the Year 12’s got the victory. The game was played in great, light-hearted spirits with both teams entertaining the crowd. Well done to all boys involved for a fantastic day. 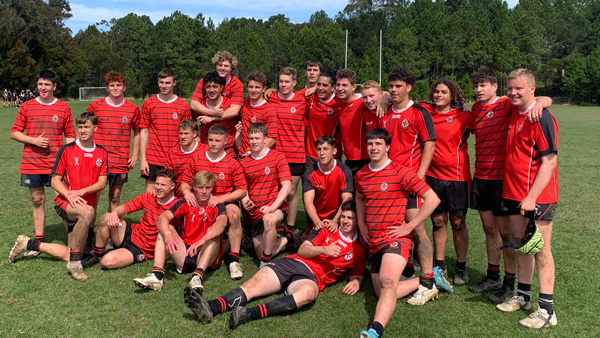