The opportunity to play in front of the school was enough motivation to get the boys up for a great day of Rugby League. The format for the day involved each team playing each other, with the winner being first past the post. The Under 14 winner would progress to the next round of the Cochrane Cup and the Central Coast All Schools grand final. The winner of the Open’s would also progress to the Central Coast All Schools grand final day.

In the Under 14’s due to our abundance of footballers, we submitted 2 teams (Red and Black) to compete on the day. Both teams played 4 games each and showed the big crowd at the College what they had to offer.

Team Red went through the day undefeated and progressed through to the grand final to be held in Week 10. The final game of the day provided the College with the most highlights with Jay Clarke scoring 2 scorching tries down the right edge and Kieran Dafter also scoring a long-range solo try from within his own half. With the impressive leadership of Archer Mesritz and precise kicking game of Sam Flakus, the boys managed to win the final game of the day 28-0 in front of a vocal crowd to progress through to the grand final. Other special mentions for the day goes to Cameron Day, Oscar Mahoney, and Tyson Finn.

The Under 14 Black Team played their friends from the Red Team. The Reds are a very good side and managed to hold the ball for most of the game, winning 22-0. The Black Team tried very hard in defence. Unfortunately, a few errors were quite costly. The boys then played St Peter’s Catholic College, losing 6-0 and MacKillop Catholic College losing 12-0. In both these games the Black Team improved out of sight. Their defence against St Peter’s College who were consistently attacking our line was outstanding. We won the final game against St Brigid’s Catholic College on a forfeit as they had sustained a few injuries. Thank you to all the boys who represented the College. It was an enjoyable day, and your sportsmanship is to be commended.

The Open’s team won both games against St Peter’s Catholic College and MacKillop Catholic College very comfortably, scoring some fantastic tries. A combination of slick ball movement and determined running saw the team dominate possession and run away with both games. 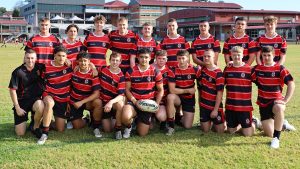 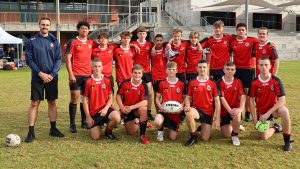 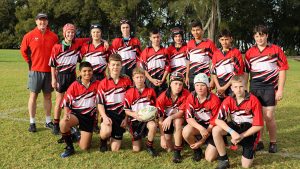