BBSSSA Tennis
Trials for the 2019 team were held in Term 3 and we were delighted by the number of talented tennis players who participated.

Unfortunately again in 2019 the Broken Bay Tennis Tournament was held in a week which clashed with both our Year 10 camp and Year 11 exams and so these boys were unable to trial for the team, but we had many students from Years 7, 8 and 9 to consider. As we are only able to put forward a team of 9 players, difficult choices needed to be made.

The team selected, we made our way to Oxford Falls on Tuesday 29th October, one player down due to a last minute illness. Conor Murphy in Year 7 and Kale Puata in Year 7 played with Max Leaitua in Year 7 in the junior team. They stood out in their pool for the power and precision of their serves and did not drop a single set. The boys dominated the semi-finals against Mater Maria College, winning convincingly in two sets. They met St Paul’s College in the final and went down to a more experienced team. I look forward to seeing what these players can do in the future.

Given the unavailability of our Year 10 and 11 players, our senior team was staffed by students playing up a division. Lachlan Shedden of Year 9 and Simon Barber of Year 8, were joined on the day by a member of the St Leo’s Junior team standing in for their sick team mate. They played valiantly but could not compete with the superior reach of the older players. The boys played some tough tennis and should be proud of their efforts.

Our Championship Team, Max Byrnes, Adam Miller and Conor Kelly won all of their pool games and defeated St Paul’s College in the semi-finals to win a place in the finals. After a close match it all came down to a tense final set where they were narrowly defeated by St Augustine’s College. The boys were very disappointed to miss out on an opportunity to return to Bathurst in 2020 but are to be congratulated for their sportsmanship. Two parents from opposing teams approached staff to comment on this aspect of the team’s performance on the day.

The boys’ commitment and behaviour was praiseworthy and we are all looking forward to next year’s challenges. 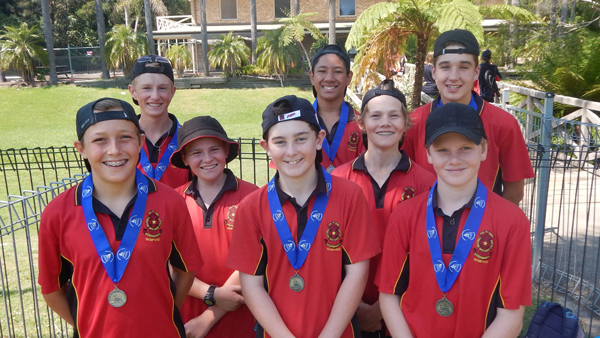