Our first game was against Mater Maria College, Warriewood, with a convincing 8-1 win. Our tries were scored by Kale Livesley, Riley Stevenson, Owen Flaherty, Boston Passeri and Wiremu Tibbutt. The team showed great tenacity in defense letting in only one try. Their ability to interchange in a swift motion was impressive. Marc Phillpott steamrolled his way up the sideline, scoring two consecutive tries.

Our second game was against St Paul’s College, Manly, with St Edward’s winning 6-2. Quick play the balls and good driving ensured that we kept the opposition on their toes. The boys had slick combinations and were not frightened to throw the ball around. They drew in the opposition and created numbers in order to gain metres and score.

The third game was against MacKillop College, Warnervale, and our defense continued to be impressive. Riley Stevenson was on fire, scoring a hat trick. Sandon Smith had great ball carrying skills, throwing many cut out passes.

In the quarter finals we met a younger, yet enthusiastic team from St Brigid’s College, Lake Munmorah. The boys were very relaxed and threw the ball around splitting up our opposition. Quick dumps and fast scoops allowed the game to flow quickly with the St Edward’s team running away with a 10-1 win. Kale Livesley and Tyler Moriarty both scored two tries on their respective wings, after passes were thrown from one side of the field to the other.

We met St Leo’s College, Wahroonga, in the semifinals, with another outstanding win to beat them 8-3. There were some great scoops and wraps by all the boys. The precision with which the team did their subbing, showed great transitioning skills. They were really a well-oiled machine! The heat and dry winds were a challenge and although the team was exhausted, they continued to dig deep.

The boys impressive skills were not missed by the Broken Bay selectors and a total of 8 boys were chosen in the possible/probables game. These were: Joshua Woutersz, Riley Stephenson, Sandon Smith, Boston Passeri, Wiremu Tibbut, Zac Healy, Owen Flaherty and Fletcher Powell. At the conclusion of the game, Joshua, Sandon, Wiremu and Owen were chosen as members of the Broken Bay Squad, with Boston selected as a shadow. 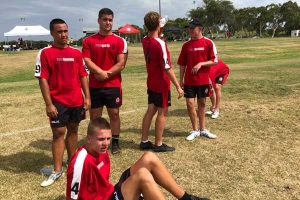 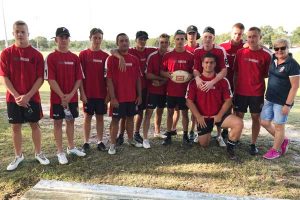 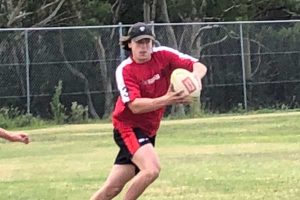 At the conclusion of the day, a tired St Edward’s team played St  Augustine’s College, Sydney, in the grand final, going down bravely 1-3. Sandon Smith had some impressive assists and Owen Flaherty was solid in defense. Boston Passeri, although totally spent, still managed to score a try

Although the team were not the winners on the day, their efforts were sterling nonetheless. In total, the team scored 39 tries and only allowed 12 tries to be scored against them during the whole competition!

Overall, these young men were excellent ambassadors for the College, showing great sportsmanship and excellent manners to the opposition, the referees and staff from other participating schools.

I would like to thank Mr Speziale for managing the team on the day.