Open Rugby League
WOW!! What a game, what a year!

Three words come to mind when I think about this years Open Rugby League Team – Luck, Momentum and Resilience.

Luck – To do well in these competitions you need a bit of luck and we certainly had some this year. Callum Richardson knocked the ball lose on a Terrigal player who was about to score on the bell in our Central Coast Final – we won 12-10.

Momentum – The boys certainly felt the full effect of this in the final 4 minutes of the Schoolboy Trophy Final. Down 36-18, the boys scored 3 converted tries in the last three sets of the game to tie at 36-36. In extra time they held their composure to kick the deciding field goal in golden point – to win 37-36.

Resilience – In the City and Schoolboy Cup Finals we played against far bigger opponents who started both games at a whirlwind pace. In both games, we were down on the scoreboard and the team needed to absorb pressure and ‘weather the storm’. Through self-belief they were able to breakdown their opponents and find a way to win.

They were coming up against a very well drilled and physically intimidating Mt Ridley College team from Victoria (The Country Cup winner).

Knowing the sheer size and quality of Mt Ridley, we had a plan to ‘weather the storm’ in the early stages and try to move around our bigger opponents and tire them out. From there we wanted to take advantage of them in the back end of the halves. Unfortunately, we were not prepared early for their onslaught and they scored two converted tries in the opening minutes. Nerves and the enormity of the task sprang to mind as the boys composed themselves and went about getting back into the game. Mt Ridley scored again, and it looked like it might get away from us as they led 18-0.

As we had expected, Mt Ridley did tire and started to make mistakes and give away penalties. The tide of possession turned, and we were able to mount pressure. Tries to Riley Stevenson and Tyler Moriarty with Sandon Smith converting both tries just before half-time, saw the boys close the gap to 18-12. Momentum had turned and we finished the stronger team going to the break.

The game plan didn’t change going into the second half. All was going well early as we had a run of possession and mounted pressure on Mt Ridley, waiting for them to crack. A sin-binning and an intercept turned the momentum Mt Ridley’s way as their lead extended to 30-12.

A nice cut-out pass from Owen Flaherty saw Levi Kasun cross in the corner. Sandon Smith again slotted the goal from the sideline to bring the score to 30-18.

Mt Ridley wrestled back the majority of possession and applied wave after wave of midfield pressure through their big forwards. A tremendous cross field kick from their five-eight saw the winger dive over in the corner to extend their lead to 36-18.

A mistake from Mt Ridley, just inside our half saw a scrum and our feed with 4 minutes 30 to go. Sandon Smith chipped from the scrum for Riley Stevenson under the posts. Sandon Smith again converted to make the score 36-24. Momentum had shifted again, and Mt Ridley slowly walked back to halfway. The team worked the ball upfield into good position as Sandon Smith took the ball to the line and grubbered through for himself, regathered and sent Riley Stevenson over for his third try. Sandon promptly converted to turn the game on its head as we now trailed 36-30. A shell shocked Mt Ridley team again walked back to halfway, steeling themselves for one more set. The boys showed great composure to work the ball up to halfway against a more committed Mt Ridley with 1 minute 30 to go. On the fourth tackle, a penalty for off-side saw us move up field into their 30 metre zone. Winding the clock down with under 1 minute to go, the boys moved the ball to the far side, to be tackled five metres out from the Mt Ridley try-line. Marc Phillpott scooped up the ball and barged over with 34 seconds remaining, Sandon Smith calmly slotted the conversion after the final siren to tie the game 36-36.

The game now moved into ‘golden point’ extra time, 5 minutes each way. At this time the belief had set in amongst the team and a composure above their years took over. We received the ball from the re-start and worked play up field. The tension in the game was gripping as we completed our set with a kick into their 20m zone. Mt Ridley moved the ball up field strongly as the St Eddies boys defended gamely. Riley Stevenson collected the ball on our try-line as we set about working the ball up-field. On the fourth tackle, a quick play the ball from Kale Livesley saw Tyler Moriarty dart down the short-side and link up with Riley Stevenson, who passed inside to Wiremu Tibbutt who was run down 10m out on the fifth tackle. A quick play the ball and pass back to Sandon Smith saw him slot the field goal to win the game 37-36.

In a game that had to be watched to be believed, St Edward’s had been crowned Schoolboy Trophy Champions for the first time.

A truly amazing achievement by all the boys involved on the day and those who played their part along the way. 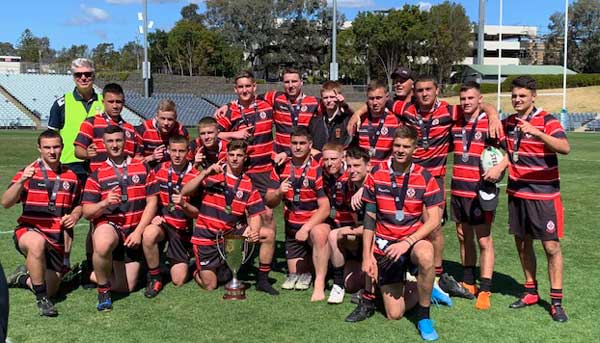