The day is open to both Year 7 and Year 8 students however the College puts in an all Year 7 team and an all Year 8 team so that the younger students can get a chance to represent the College.

Our Year 7 team played outstanding on the day winning three of their four round games. They played well as a team and were led on the field by Matty Humphries and Hunter Kay. Playing up against older boys our students represented the College with pride and came back from behind twice to win the game. Unfortunately, Kincumber High School were too good in the quarter final. Well done to the Year 7 boys who represented the College.

The Year 8 team, coached by two Year 9 students, Amyn Hamilton and Jack Legge, started slow, and took a while to gel. However, once they started to play as a team, they were nearly unstoppable. Will Hodder and Dylan Day scored several tries and inspired the boys to come together and start playing as a team. It was great to sit back and watch the students interacting and encouraging one another.

On the day there were several parents who commented on how well our boys were behaving and how positive their attitude was. All the boys represented the College with pride and for me I was just proud to be part of the black and red! 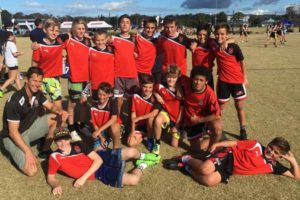 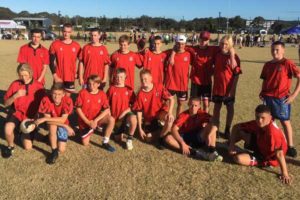