Futsal State Tournament
The team travelled to Maitland to take on the other regional winners in what would prove to be a much tougher test than the Central Coast finals.

Our first game saw us take on a strong St Pius, Adamstown team. A slow start to the game saw St Edward’s down 0-3 at half time as the players struggled to get a foothold in the contest. St Pius were faster and more assured in possession, eventually winning the game 4-0.

St Edward’s now needed to win both the remaining pool games to ensure passage into the semi finals. An improved performance against West Wallsend High School ended in a 4-2 win followed by a close victory over St Phillip’s College. After being 4-0 ahead, we conceded four quick goals, but managed to score two later on to take the 6-4 victory and a berth in the semi final. Jude Rankin and Noah Hutchins were outstanding in the last pool game with the remainder of the team still yet to hit their best form.

However, the semi final was to be the turning point! The St Edward’s team clicked into gear and ran over the top of Maitland Grossman High School to secure a re-match with St Pius, Adamstown in the final. Will Rankin and Joseph Lewis were outstanding in attack, while Aidan Ellis, Matthew Kairouz and Finn Palmqvist were solid in defence, while also very effective in possession. The final score was 7-1.

The final was to prove our finest performance of the tournament. St Edward’s came out determined to overturn the result from the pool game and pressed the opposition in all areas of the court. St Pius simply had no answer to our intensity as St Edward’s scored four goals in the opening 5 minutes. Tahj Werner and Connor McKenna consolidated our position when they came on, while Nathan Butler made a string of fine saves to keep the opposition scoreless in the first half. Although St Pius made a run at us in the second half, St Edward’s held on to record a strong 6-3 victory and claim the title of Northern NSW Schools Futsal State Champions. 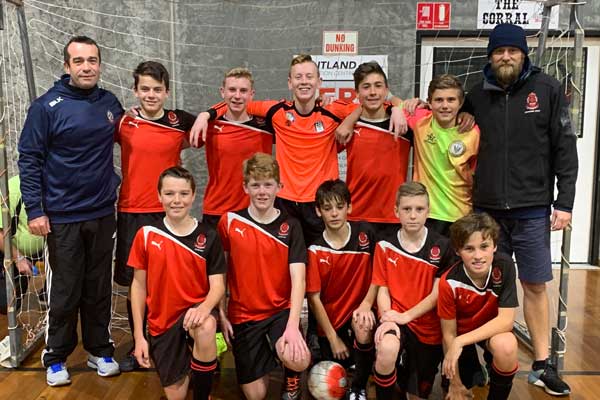